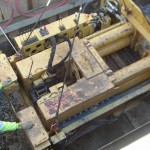 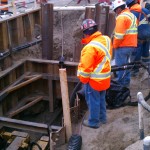 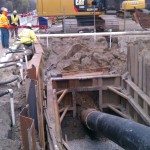 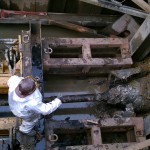 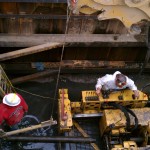 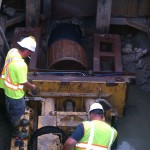 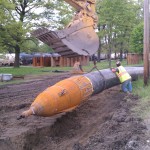 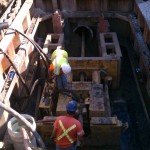 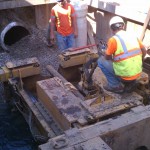 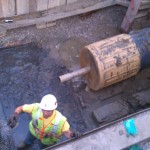 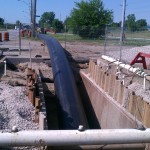 Infiltration through failed joints in a 27-inch concrete gravity sewer in Windsor, Ontario, taxed the capacity of the wastewater treatment plant during heavy rains. Hydrogen sulfide was corroding the crown in many places.

In 2002, the city put out a tender to directional drill the 3,800-foot sewer. No contractors responded. City engineer Fahd Mikhael looked at other solutions, including open-cutting, but no one would touch the job. Fearful of the sewer’s imminent failure, the city requested bidding to pipe burst and upsize the line in 2012.

Two firms responded and local SLR Contracting Group won the bid. Although the company had extensive sewer and water main experience, it had never burst pipe, and crews would have to learn on a site with multiple challenges.

“The water table 24 inches below grade made the soil like liquid sand,” says project engineer Rob DiMenna. “Our trench boxes would abut a busy four-lane parkway. Underground utilities were on the other side of our 14-foot-wide work corridor. It was intimidating.”

With guidance from Midwest Trenchless Services in Grant, Mich., SLR completed the project in three months despite a strike by operating engineers and unexpected obstacles. The company believes it also set a U.S. and Canadian record for the longest pull of 32-inch pipe – 570 feet.

Joel Kruszynski, president of Midwest Trenchless, and three associates provided on-the-job training for DiMenna’s people. “We expected the worst,” says Kruszynski. “Ground conditions were bad. The sewer was installed in 1915, so no one knew how thick the pipe was or how it was reinforced. Without knowing that, we guessed at how much force it would take to burst it. It was a crap shoot.”

To improve their odds, Midwest built a 36-inch bursting head with bullet nose, dorsal and side slitting blades, and a 12-inch pneumatic hammer powered by a 350 cfm Ingersoll Rand compressor that would add 150 tons of force to assist the 330-ton hydraulic ram. A 36-inch skirt expander screwed to the new pipe would create the annular space for the larger diameter.

“The city wanted us to sheet pile each hole, but we built four 24- by 12-foot sheet pile boxes that we could move easily to leapfrog over excavations,” says DiMenna. By working downstream, the pulling pit would become the entry pit the next day.

Vehicles on the major commuting parkway traveled at 50 mph, and the trench boxes butted against the edge of the pavement. “Even when separated by Jersey barriers, it’s very difficult for crews to work within a foot of oncoming traffic,” says DiMenna.

Officials closed the nearest lane for safety purposes and to enable workers to install sheet piling that protected the road when the boxes moved against it from the force of the pulls. SLR also held daily toolbox safety talks and a weekly meeting with its full-time safety representative.

Underground utilities on the opposite side of the work corridor included a 30-inch sewer force main, a 24-inch water transmission main, and a 16-inch gas main. DiMenna’s crew used the area to fuse sticks of 32-inch HDPE IPS (iron pipe size) pipe. After attaching the bursting head, they lowered the assembly into the pits with a John Deere 290 and Caterpillar 336 excavator.

The self-contained, hydraulic static pipe bursting machine used rods linked together to pull the head. As the rods appeared in the machine during pullbacks, SLR’s Shayne Renaud and Midwest’s Jon Snyder removed them, enabling the Caterpillar shovel to lift the rods from the hole.

Midwest’s technical experience had DiMenna’s crew comfortable with the job from the first day. “Joel and his guys were great to work with,” says DiMenna. “He made certain that we had extra power to overcome what was out there. Consequently, we tried the first pull without slurry, it was successful, and we never used any.”

Pulls of 500 feet began around 7 a.m. and finished between 2 and 3 p.m. Removing the expanders and setting up the next day’s pull took another three to four hours. “We discovered the sewer pipe was reinforced with rebar because hydrogen sulfide corrosion had exposed it,” says DiMenna. Even in sections with much of the crown missing, bursts still averaged 260 to 280 tons of force.

Because of soft ground conditions and constant dewatering, sections of highway began failing three or four feet into the closed lane. As work neared a row of utility poles, Toronto Hydro-Electric System shut off that portion of the grid for the day.

The pull progressed smoothly until the head passed under the first pole. “The pressure spiked to 300 tons about the same time the pole began moving in response to concrete displacement,” says Kruszynski. Upon investigation, workers found the pole seated directly on the pipe. Work stopped until two Hydro-Electric trucks arrived to raise the row of poles 18 inches, allowing the bursting head to pass beneath them uneventfully. This section of the pull took four days.

A strike by local operating engineers halted the project for one-and-a-half weeks. “All we could do was sit it out and pay rent on the equipment,” says DiMenna.

With issues resolved, work resumed on a pull that would pass under a 20-inch 700 psi natural gas main. “Original drawings indicated 12 inches of clearance between the gas main and sewer,” says Kruszynski. “When we open-cut to expose to the line, it sat right on top of the sewer. That caused some havoc.”

With no room for displacement, the bursting head and broken concrete could damage or rupture the main. Workers undercut the sewer, then pushed it into the depression with the excavator bucket. “We crossed our fingers and started the pull,” says Kruszynski. He advanced the head as slowly as possible, enabling the concrete pieces to fall safely into the void.

The pressure also spiked to 300 tons when bursting through the sewer’s 10 unevenly spaced concrete manholes. DiMenna reduced the number of structures to seven by increasing the distance between them and eliminating the last one. The decision extended the final pull to 570 feet, but it was uneventful.

A crew from SLR Contracting Group lowers a bursting head, skirt expander and 32-inch HDPE pipe into a shoring box with John Deere 290 and Caterpillar 336 excavators. The job required sheet piling to be driven alongside the closed lane of a four-lane parkway to protect the road from the force of the pull-backs.

A crew from SLR Contracting Group lowers a bursting head, skirt expander and 32-inch HDPE pipe into a shoring box with John Deere 290 and Caterpillar 336 excavators. The job required sheet piling to be driven alongside the closed lane of a four-lane parkway to protect the road from the force of the pull-backs.